The Price of Crude Oil and Petrol

Most economists consider the price of fuel to operate like a tax. This is for two reasons:

This means that the higher the price of fuel, the more it costs to cover the same mileage and so the less disposable income is available to buy other things. Therefore, when fuel prices drop we can expect more consumer spending and a boost to the economy.

What has happened to the price of petrol? 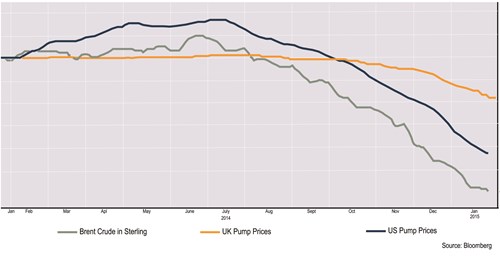 Since June last year the price of Brent Crude has more than halved, as you can see in the chart above (grey line). This has resulted from the oversupply of oil in the wholesale crude market and Saudi Arabia’s decision to continue pumping at its previous levels (in an attempt to defend its market share).

This development has been welcomed by politicians and economists alike. The resulting fall in the price of petrol should leave motorists with extra money in their pockets, most if not all of which is likely to be spent. Most earners are estimated to have suffered a cut of around 10% in their real income since the events of 2008, given that pay rises have been scarce and inflation has continued to erode the purchasing power of their income. This should therefore feed directly into higher spending, thus reinforcing the economic recovery.

Crude oil has halved in price, why hasn’t petrol?

The chart above looks at UK (orange line) and US (blue line) pump prices alongside the price of a barrel of Brent Crude, petrol’s raw material. The axis has been rebased so that both pump prices can be compared in Sterling. As the graph shows, pump prices were fairly static in the first half of 2014 when the price of crude oil was high and stable.

However, since the end of June 2014 the price of Brent has roughly halved, while the pump price is down less than 20% in the UK. The windfall hasn’t been as large as we would expect, but where has the difference gone? Have we been short changed?

To answer these questions we need to look at the key components of the UK petrol price. More importantly, how they have changed between June (before the price of crude started to fall) and now that it has halved.

While the overall pump price has fallen by 18% and the underlying cost (including the petrol station’s margin) has fallen by 39%, the Government’s total fuel tax has reduced by only 5% (see right-hand column).

Fuel tax consists of two elements – a specific duty (which was set in the last budget at 57.95p) and VAT at the standard 20% rate. Because of the way it is levied, we pay VAT not only on the cost of fuel, but also on the duty paid – a tax on a tax!

UK petrol is amongst the most expensive in Europe

According to the RAC Foundation, petrol in the UK is third most expensive in Europe. The 107p per litre cost is notably higher than in comparable countries such as Germany (96p) and France (90p). This is despite the fact that the underlying cost of petrol in the UK is amongst the lowest in Europe, although the tax paid per litre is one of the highest.

US pump prices have halved due to lower duty

As shown by the blue line, US pump prices have roughly halved between June 2014 and now. In the US a litre of petrol now costs 41p, of which only 8.5p is typically duty (20% of the total pump price, compared to 71% in the UK). Even though the underlying cost of fuel in the US is similar to the UK – 32.5p vs 31.03p – in the US the cost makes up a much larger percentage of the total pump price. Therefore, proportionally more of the fall in the oil price is passed on to the consumer in the form of a lower pump price, rather than being swallowed up by duty.

July market update – the US dollar was notably weaker over July

What type of life insurance or cover do I need?

The case for staying invested over the long term