The case for staying invested over the long term

A common mantra in investing circles is ‘it’s about time in the markets, not timing the markets’. In other words, the best way to make money is to stay invested for many years, rather than worrying about whether now is the best time to invest. In this article we examine the case for staying invested over the long term.

An introduction to volatility

Before looking at why or how people try to time the markets, it is important to consider stock market volatility. This is a mathematical measure of the erratic up-and-down movements we see in share prices. Volatility is often what unnerves first-time investors who have grown used to the certainty of money in the bank.

Consider a company like Unilever. It has dozens of brands, from Dove to Domestos, which it sells in countries across the globe from China to Chile. Its share price reflects how each of those products are selling in each of those markets, as well as investors’ best guesses for how those products will perform in the future. All of those factors constantly change, so its share price will naturally move up and down to reflect those changes – volatility.

One way around this volatility is to diversify – put simply, buy lots of shares. Buying any one company can be a rollercoaster ride, but buying lots of them smooths out some of the ups and downs. For example, if your BP shares are doing badly because oil prices are low, your Ocado shares might be doing better because its delivery vans are benefitting from cheaper petrol.

The simplest way to diversify is to buy a fund – an active fund might have 50 stocks in its portfolio, while passive ‘tracker funds’ can buy hundreds of stocks covering a whole stock market. But even if you own every company in the market, the fact remains that the market itself is often volatile.

Why are markets volatile?

Apart from how companies themselves are doing, markets also reflect confidence in the wider economy. Economic growth, interest rates and inflation can all have an impact even at the best of times, and that’s before we get on to less predictable events like a banking crisis, last year’s US-China trade war or the Covid-19 pandemic. Introducing confidence also brings in another factor, human emotion, which is both hard to predict and prone to fluctuation.

So how can we avoid volatility?

The risk of inflation

One way is not to invest at all. Savings accounts guarantee you your money back, plus interest. However, removing stock market risk carries its own risk: inflation. Its power can be seen in the steady increase in the price of most goods – from a first class stamp to a one-bedroom flat.

Low interest rates mean that if your money is kept in cash, it won’t keep pace with inflation. Your account balance will still go up, but you’ll be losing money in ‘real’ terms (in other words, losing spending power). Conversely, companies can often beat inflation simply by raising their prices, so investing has the potential to outpace inflation and give you a ‘real’ return over the long term.

What is timing the market?

Some investors try to beat volatility in another way, by trying to time the market. This involves trying to second-guess the ups and downs with the hope that you will buy when prices are low and sell when they are high. Nobody wants to lose money, so why not simply invest when times are good and sell out when times are bad?

The answer is that it’s extremely difficult. If everybody knew bad news was around the corner, they would already have sold their shares and markets would already have fallen. Those who do sell out ahead of a crisis make headlines precisely because they’re so rare – think of the US housing market crash in 2008. The small number of investors who predicted it were portrayed by film stars in The Big Short, while the lives of the millions who lost money were quietly ignored by Hollywood.

Sitting on the sidelines during volatile markets

A less extreme example of timing the markets is sitting on the sidelines during periods of volatility and waiting for things to improve. And with issues such as Brexit, the US/China trade war and the coronavirus crisis causing higher market volatility in recent years, many people have been doing just that.

However, those who did this missed out on one of the stock market’s best ever years in 2019, when global markets rose +23.4%. And while staying on the sidelines might have spared investors the falls of March 2020, it can also cause a different error.

Timing the market carries the risk of missing the ‘good’ days when share prices increase significantly. And historically, many of the best periods for stock markets have occurred during periods of extreme volatility.

For instance, between May 2008 and February 2009 in the depths of the global financial crisis the MSCI World index of leading global companies dropped by -30.4%. By the end of 2009 it had bounced back +40.8%. Anybody who pulls money out in the early stages of a volatile period could miss these good days, as well as potentially locking in some losses.

The importance of time in the market

Instead of trying to time the market, we believe that spending time in the market is more likely to give you good returns over the long term. Of course this means experiencing the bad days as well as the good, but history has shown that there tends to be more of the good days and over time this difference tends to mount up significantly.

For instance, the MSCI World index has delivered average annual returns of +12.4% since it was launched in 1969, though it has been a bumpy ride at times. We believe that successful investing requires patience and taking a long-term view, and being comfortable riding out the short-term ups and downs for the chance of a much better return over longer periods of time.

The chance of losses reduces over long periods of time

You can see evidence of this trend by looking back at how the stock market has performed in the past. We calculated the minimum and maximum annualised returns that you could have received by investing in the global stock market for every single 1, 3, 5 or 10-year period since 1970*. The results are shown in this chart. 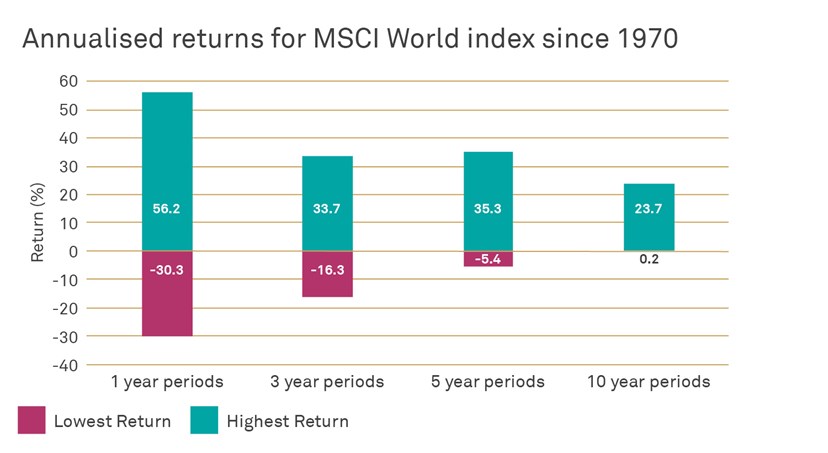 The first bar shows that the returns from 1-year periods (such as from 1970 to 1971) were extremely varied. Investing in any 1-year period could have given you a return between -30.3% and 56.2%. This demonstrates the volatility that can be seen in stock markets over the short term.

But over 10-year periods (such as from 1970 to 1980), annualised returns ranged from 0.2% to 23.7%. Not only were there no periods where the index fell, but the range of potential annual returns was also much narrower.

Although the past can’t be taken as a reliable indicator of the future, this does suggest that investing for longer periods of time decreases the chance of overall losses. On top of this, it suggests that short-term stock market volatility tends to cancel itself out over longer periods of time, giving more consistent long-term returns.

The power of compounding

One of the reasons that long-term investing has the potential to deliver such great returns is the power of compounding – the snowballing effect of your returns generating more returns over time. Einstein allegedly called compounding the eighth Wonder of the World, and some simple examples show what he meant. If the market returned 10% a year your money would double in just eight years. Even if it returns 5% your money would double in fifteen years.

Compounding is mostly achieved through dividend payments, which can be reinvested into more and more shares over time. However, you can also see its effect when companies invest their profits to grow their business – this generally results in greater profits going forward, and a higher share price. Amazon has never paid a dividend, instead reinvesting its profits into its IT systems and distribution network, and turned itself into a trillion dollar business in less than 25 years.

An example – what would happen if you invested at the worst possible time?

The power of this historical upwards trend can also be seen if you consider a fictional investor that has invested at the worst possible times over the last 40 years. If they had invested £10,000 into the global stock market at the peaks before each of the following events:

Their original £50,000 investment would today be worth £188,242 – a profit of over £130,000! Of course, past performance isn’t a reliable indicator of future performance, but it demonstrates how strongly markets have risen over the long term, even if you had invested at the worst possible times.

While steep falls in your investments can be unnerving, it’s important to bear in mind that short-term volatility is the price you must pay for the chance of higher long-term returns. Rather than try to second-guess market movements, the best strategy is to ride them out and invest for the long term. Your choice of portfolio should reflect your individual circumstances. However for those are going to invest, the answer to the question “When is the best time?” is almost always “Now!”

*Based on the performance of the MSCI World index from 1970 to 2020, across calendar years, with annualised returns.

The Tilney Investment Podcast – how is coronavirus affecting the economy?

The 6 key pillars of effective financial planning for company executives

Can I afford to retire even if my pension has dropped in value?

May Market Pulse – how will the economy change after lockdown relaxation?